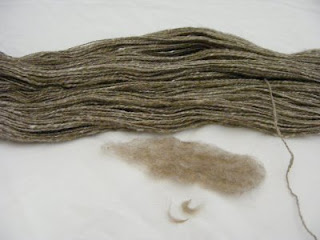 I finally finished spinning some fiber that I had purchased from someones de-stashing sale early last year. It was 65%Merino/30% New Zealand Possum/5% Nylon. When I first began spinning, a woman in the guild was spinning some unusual looking fiber. When I asked what she was spinning, she said New Zealand Possum and Merino wool. It was so soft and she was spinning it so fine, of course being a new spinner I knew an exotic fiber would have to wait until I had more experience. Flash forward a few years, I had finally got to the point I thought I could handle spinning possum. So when I saw this for sale I just had to have it, but once it arrived in the mail it was not the possum I remembered seeing or feeling. This stuff was harsh feeling and had all of these noils/small white lumps in it. Who ever thought it was a good idea to put nylon in the mix really messed it up in my opinion. I had to constantly stop to pick the little lumps out of the fiber. I finally got so tired of messing with it that I didn't finish spinning all of the fiber. I wanted it gone so I removed the single onto a ball and quickly plied it then washed it and left it to dry. After it dried it suddenly transformed into ....ooh! aw! it was soft, it has a halo, it's not stiff, it's really nice stuff...... I still hate the little lumps of nylon. You can see the two little wisps of possum fur in the bottom of the photo, they are about a inch long. I had picked the small bits of nylon out of this piece of fiber so you won't see any there. You can definitely see the little lumps of nylon in the spun yarn. Now what did I do with the rest of that fiber, I think I may have to go spin the rest of it up........hmm!?
I thought I should add a little info about New Zealand Possum fiber here. It is a hollow core fiber, which makes it light and warm to wear. According to sources I found it is a smooth fiber which combined with other natural fibers will produce a yarn which does not pill and is hard wearing. The light possum fiber stands out to give a fluffy look to the finished garment. New Zealand Possum down, is similar in quality to mink and is around 1 to 1.5 inches in length. The underfur is light in color, the guard hairs are dark and tend to stick out from the spun yarn. It is suggested that it be spun fine and quite firm rather then bulky.
The Australian Bush Tail Possum was introduced into New Zealand in the 1800's, is about the size of a large domestic cat. It does not have any natural predators, and has multiplied so profusely that in some places the Forest devastation is critical. The possums ignore old leaves and eats the best new growth. In some areas it has destroyed whole trees. They compete with native birds for food such as insects and berries. It has also been known to disturb nesting birds, eating their chicks and eggs. In the past few years it has been found right in the heart of many cities.
Due to the difficulty of getting the possums out of the bush and the work involved in plucking the small amount of fur from each possum it can be expensive compared to other fibers. Therefore blending it with wool has made it more affordable and expanded its use in the fiber market.
Posted by Bj Thomas at 5:11 PM 4 comments: 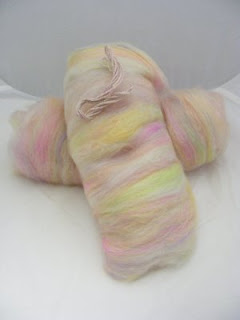 To the right -> is a 50/50 blend of rainbow dyed tussah silk and merino that I blended on my drumcarder. I spun up a small sample to see how it would look you can see it there on the batt of fiber.
I have added this and some 50/50 blend camel and silk (below)to my etsy store go check it out when you have a chance.... 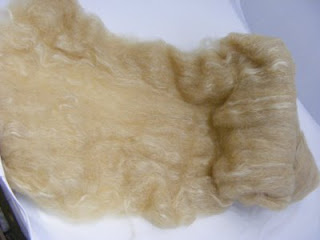 I hope this works as this is my first time to try to add photos .......thanks for lookin'
Posted by Bj Thomas at 3:55 PM

Welcome to my blog

Welcome to my new blog......I'm as nervous as a cat on a hot tin roof. I'm not sure why , its sort of like the old party line telephones makes one feel a little exposed. My son talked me into this so its his fault!
I have dabbled in crafts of one kind or another all of my life it seems, I'm sure most of you feel the same way. I have sewn my own clothes, worked in sewing factories, and sewn for others. I have made ceramics and worked in a ceramic shop pouring molds. I made macrame plant hangers, chairs, and curtains with beads. LOL! I have re-upholstered furniture worked in an upholstery shop and even re-upholstered car interiors. One of my favorite jobs was working in a small pet store, I began by cleaning tanks and worked my way up to management. I have shown and trained dogs for confirmation and obedience trials. I have always had birds of some kind and still do... I have done tole painting and canvas painting, embroidery of all kinds, hardanger is still my favorite. I made and successfully sold teddy bears for about 8 years before retiring from that job. My hubby and I put on teddy bear shows in our area until my we retired from that.... Now I spin, weave, and teach others, hubby and I occasionally give demos at schools in the surrounding area. I have a etsy store at http://www.threadsthrutime.etsy.com/ check it out if you get a chance.
Dale (my hubby) makes wool pickers, tri-looms and inkle looms in his workshop after he gets home from his day job. Dale started having shoulder trouble from pounding in all of those nails and has recently had rotator cuff surgery. He is healing up nicely and should get his arm out of the sling tomorrow. It will still be a month or more before he is ready to pound on more nails, you can see more on his web site at http://www.thomas-creationsllc.com/
Dale and I have been married more then 32 years now and in our 12th year of marriage we were blessed with a son, our one and only. Joshua is now 20 years old and going to college, he is studying computer forensics...not sure what it is but they apparently have classes for it.
We have angora goats, french angora rabbits, bantam chickens, call ducks, ring neck dove and now diamond dove. We are owned by 2 dogs Jax a Pembroke Corgi/ Welsh Cardigan cross and Mollie a Yorkshire Terrier. We are allowed to share the same space as Patches our 10 year old calico cat.
Well, I have rambled on more then I thought I would or should. I hope to talk more about spinning fiber and preparing fiber and less about me on my next post.
Posted by Bj Thomas at 2:49 PM 2 comments: 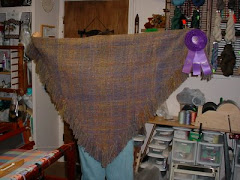